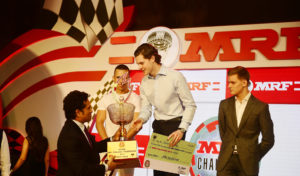 Harrison Newey was crowned the MRF Challenge 2016 Champion after beating Mick Schumacher and Joey Mawson in the final race of the season. Newey and Mawson finished tied on 277 points but the British driver took the title due to having had more wins than his rival. Earlier in the day Harrison Newey took his 5th win of the season ahead of Juri Vips and Ralf Aron as Mick Schumacher spun out of the race. Sandeep Kumar beat Raghul Rangasamy and Karthik Tharani to win Race 2 of the MRF 1600 series.

Starting on pole for the second time this weekend, Newey got the perfect start as Schumacher got bogged down and dropped down to 4th position. Newey pulled away at the front with Vips got passed Aron and slotted into 2nd place. Mawson again started from a lowly 7th place but moved up to 6th and set his sights on Daniel Ticktum ahead. Schumacher tried to get past Aron on lap 2 but could not make the move stick. On lap 6 Schumacher spun out of the race at the back section while chasing Aron and Vips. In the meanwhile Mawson passed Ticktum to move into 4th place. Newey comfortably crossed the finish line in 1st place ahead of Vips and Aron. Mawson finished in 4th place ahead of Ticktum and Felipe Drugovich.

In Race 2, Mawson had the perfect start and went into C1 first ahead of Newey and Schumacher. There was action in C1 as Aron and Neil Verhagen crashed, bringing out the safety car. When racing resumed on Lap 5, Mawson held on to the lead with Newey all over his gearbox. Schumacher in 3rd stayed with the two leaders, as has been the case for most of the season with these three driver fighting each other all year long. Mawson looked on course to take the title but a costly mistake on lap 11 into the last corner allowed both Newey and Schumacher to get past. Still Mawson had a 2 point lead. With 2 points being awarded for fastest lap of the race, the top 3 drivers gave it all they got. Newey set the fastest lap on lap 13 only for Schumacher to do it on lap 14. On the final lap of the race Newey went three tenths off to set the fastest lap and win the title.

Harrison Newey was ecstatic after winning the title on the last lap in front of his teary eyed father, Adrian Newey. He commented, “It is just an unbelievable feeling to win the title like this. I knew I had to set the fastest lap if he was in 3rd and to do it this way is just amazing. This has been a great season with strong competitors in Schumacher and Mawson.”

In Race 2 of the MRF 1600 championship, Sandeep Kumar started on reverse grid pole position ahead of Raghul Rangasamy. Sandeep got the lead off the line with Raghul, Anindith Reddy and Karthik Tharani right behind. Tharani started putting pressure on Reddy and got past him on lap 4. Raghul continued to trouble Sandeep but could not find a way past as Sandeep comfortably crossing the finish line to win his first race of the season. Raghul got his second podium of the weekend ahead of Tharani and Reddy. Chetan Korada and Ishaan Dodhiwala.

In its fifth year, the MRF Challenge will feature MRF Formula 2000 race cars, which have been made in India by JA Motorsport, who are based in Coimbatore. The Formula 3 style car has been built by JA Motorsport in technical collaboration with Dallara, and is considered to be the fastest of its kind in Asia. The new car is powered by a 2 litre Mountune Duratec engine with max power of 230 bhp and shod on MRF Z.L.O. tyres. The car will also feature advanced aerodynamics with underbody diffuser and a Hewland 6-speed sequential gearbox.